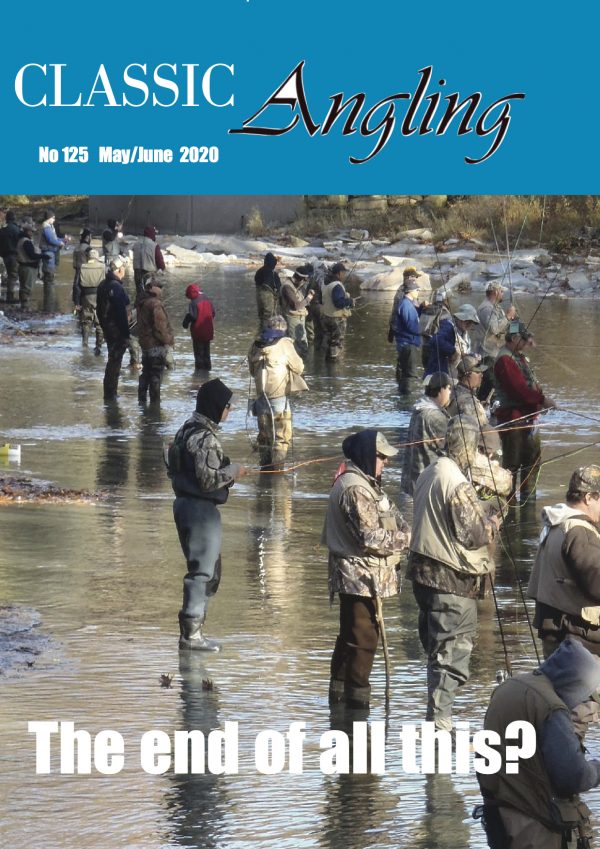 COVER STORY: How coronavirus will affect all aspects of angling in the long-term, especially stocks of the highly endangered humpback mahseer.
Hardy’s still sold plenty of tackle during the First World War despite the hostilities, John Drewett reveals, as he looks back at how the company survived the war years.
A new trust is being set up to protect and preserve wild carp. The plans have attracted international appeal.
Burbot, a fish believed to have been extinct in the UK for 50 years, could soon be reintroduced.
A modern bass lure made by Japanese company Romanmade has just sold for $1600. Special rods are being made to cast the 16in bait.
Owner of any angling tackle with ivory in its content may see its value plunge if the Court of Appeal releases a negative ruling on the 2018 Ivory Act.
An alligator gar, a fish commonly found in the southern US states, has been found dead alongside a canal in Wales.
Asian carp are spreading along the Mississippi, and a diploid grass carp has been found close to Lake Huron.
Classic lure enthusiasts enjoyed a bonanza in Lang’s latest auction, with two very special collections up forming the bulk of the 200-lot sale.
A very early pot-bellied leather creel has been sold for £6000 at Mullock’s latest auction. The creel dated back to the 1700s.
Angling Auctions owner Neil Freeman, forced to cancel his traditional spring sale, is likely to allow online bidding for the first time when he reprises the sale in October.
Hopes have been raised that the Highland village of Brora will embrace Classic Angling’s campaign for a permanent memorial to the great salmon fly tyer Megan Boyd.
It’s been a bad time for many of angling’s important names, We carry obituaries of Geoffrey Bucknall, Roy Flury, Bob Buteux, Graydon Hilyard and Paul Volcker.
Neil Freeman vows to start ticking off items from his fishing bucket list after a spectacular expedition to northern Norway lands halibut and huge cod.
John Bailey reveals for the first time details of his grandfather’s fishing talents, and wonders whatever happened to his collection of cased fish.
John Stephenson is reunited with a wonderful fishing shield, over 100 years old, which once graced his tackle shop.
Our book reviews look at the book detailing the superb collection of cane rods assembled by leading collector Dave Petty, and admire Tom Fort’s panoramic latest work.
Dave Steuart uncovers reports from the 1860s showing that Testwood weir on the Test has been impeding salmon progress for more than 150 years.
Tom Seccombe Gray, better known as Silver Devon, was a fishing vicar who contributed several original accessories to Hardy catalogues.
Will Ryan has had plenty of success with game fish but his run-ins with the toothy muskellunge have always ended badly.