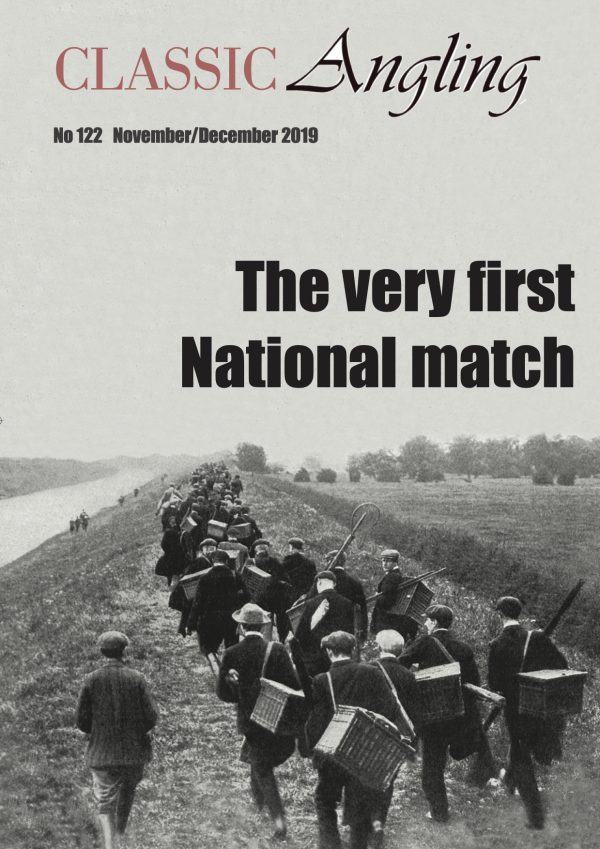 COVER STORY: An excerpt from a new book on the UK National Championships tells the story of the very first competition in 1906 on the Thames at Reading.

* Will Ryan enjoys the sensation of being the only angler on a river as he fly-fishes in winter.

* An angry letter supposedly written by Ernest Hemingway and complaining about Hardy tackle is a fake, we can reveal.

George Kingsley, the wildest member of his famous family, was a physician to several aristocratic families but spent most of his time fishing and shooting.

When steam was rising from the water, you could be assured of good fishing on the Electricity Cut at Peterborough, a water that dominated carp fishing in the 1960s.

A 40lb brown trout caught from a Missouri lake came within a whisker of the world record – but it was not the largest trout in the water.

A Talbot reel display cabinet that soared to $25,000 was the surprise highlight of a hugely successful online auction at Lang’s.

Neil Freeman risks his aching back in pursuit of giant bluefin tuna that have appeared off England’s Cornish coast.

We pay tribute to Tim Benn, the philanthropist and publisher of some of the very finest angling books through his Creel Press imprint.

John Bailey rails against a ‘tsunami of digital progress’ and argues that much of the magic of our sport has been stolen.

Hardy’s has unveiled a new version of its Perfect reel that pays homage to the world’s great salmon rivers.

Can you have too much of a good thing? Angling Auctions’ latest sale was a treasure trove of rare tackle items.

A new column by Jason Lewis looks at the hidden delights in paper ephemera.

PLUS: events, letters, book reviews and much, much more.